Psoriasis is one of the most common chronic skin conditions in Canada.  It has a very significant impact on patients’ quality of life.  In addition to the skin manifestations, patients may also have associated conditions like psoriatic arthritis and depression. There are different types of psoriasis, and the most common one is called plaque psoriasis.

Classically, plaque psoriasis presents itself as areas of red and inflamed skin, usually covered with thick and white or silver-colored scales.  The skin can be very itchy and/or painful. In patients with darker skin tones, the affected skin can look purple, dark gray, or brown.

Have you ever wondered how normal skin transforms into inflamed skin in psoriasis? Do you want to know how available treatments help to treat psoriasis? We will walk you through the process step-by-step and help you understand the terms used by your dermatologist.

At the end of this article, you will be able to:

Psoriasis is well recognized as a chronic inflammatory condition. The red appearance of psoriasis reflects underlying sustained inflammation of the disease. It then leads to uncontrolled rapid overgrowth of skin cells (called keratinocytes), which are seen as thick scales on top of the red skin.

The ultimate cause of the inflammation is a malfunction of the immune system – more specifically, disturbances in the innate and adaptive immune responses of the skin.

How Does the Immune System Work?

What are innate and adaptive immune responses? The innate immune response is the immunity everyone is born with, a type of general protection. It can quickly recognize and deal with threats in a nonspecific manner regardless of what they are.

On the other hand, adaptive immunity develops throughout our lives and is based on immune cells called T cells and B cells. You can consider T cells and B cells as the soldiers on the battlefield of the immune system. It takes time for the adaptive immune response to develop in the human body and the response to an “invader” will depend on what that invader is. There are three major types of T cells involved in psoriasis: T helper type 1 cells (Th1 cells), T helper type 2 cells (Th2 cells), and T helper type 17 cells (Th17 cells). You can think of each as a different type of soldier.

What Exactly is Inflammation?

There are two important components of the activation of the immune system:

If you take a small sample of the skin from patients with psoriasis and examine it under the microscope, you will see abnormally abundant immune cells, including dendritic cells, macrophages, T cells, and neutrophils, present in different layers of the skin or even in the blood vessels. At the same time, the level of cytokines are significantly elevated. If the immune cells were the soldiers, the cytokines can be considered the bullets/bombs. You can imagine the immune cells (soldiers) and cytokines (bullets/bombs) working hand in hand to contribute to the initiation of the skin inflammation in psoriasis.

There are two phases of the development of psoriasis: 1) the initiation phase, possibly triggered by mostly unknown factors and a few known factors (trauma to the skin, skin infection, or certain drugs); and 2) the maintenance phase with a chronic clinical progression.

Initiation Phase: The initiation phase is based on the innate immune response. The exact first step of the inflammation in psoriasis is unclear, but we have observed that psoriasis can be triggered by some sort of “trauma” to the skin, including direct trauma to the skin (e.g., a cut, bruise, burn, or bump), skin infection by microorganisms, etc. The reason that not all people with skin trauma will develop psoriasis is that there is a genetic component playing a role, which makes some people more susceptible to developing psoriasis.

When the skin experiences the trauma, the trauma kicks off a chain reaction, involving immune cells and cytokines. First, the injured skin cells (keratinocytes) release small molecules called antimicrobial peptides (AMPs) [Step 1 in the diagram]. Then, AMPs activate one particular type of immune cell called plasmacytoid dendritic cell, which produces a cytokine called interferon-alpha (IFN-alpha) [Step 2 in the diagram]. After that step, the IFN-alpha activates another type of immune cell called myeloid dendritic cells. A bunch of dendritic cells then become activated and they will secrete two very important cytokines called tumor necrosis factor-alpha (TNF-alpha) and interleukin-23 (IL-23), [Step 3 in the diagram]. If you could stop the chain of reactions at any point, the inflammation will improve. This is the reason that TNF-alpha or IL-23, are the targets for many psoriasis drugs, as you will see later.

Maintenance (Chronic) Phase: In contrast, the maintenance (chronic) phase of the inflammation in psoriasis is based on adaptive immune system.

As mentioned in the immune response section above, there are different types of soldiers in the adaptive immune system. The most important ones here are the Th17 cells, which play a crucial role in many autoimmune diseases, including psoriasis and Crohn’s disease, a type of inflammatory bowel disease that may affect any segment of the digestive tract. The elevation of TNF-alpha and IL-23 from the initiation phase will lead to the activation of Th17 cells. How about IL-12? IL-12 activates the Th1 component of the adaptive immune system, which is less understood than Th17. Let’s go back to Th17.

With the activation of Th17 cells, two other important cytokines are released: IL-17A and IL-22 [Step 4 in the diagram]. Both IL-17A and IL-22 will activate keratinocytes. The activation of keratinocytes perpetuates the inflammation by completing the whole cycle as shown in Step 5 of the diagram. With the completion of the cycle, the active inflammation will exacerbate psoriasis in the absence of the initial triggers (for example, an initial skin trauma).

Besides dendritic cells and Th17 cells, there are also other types of immune cells that are abundant in the skin cells that are affected by psoriasis, named macrophages and neutrophils. We know they contribute to psoriatic inflammation, but their specific roles are not well understood yet. 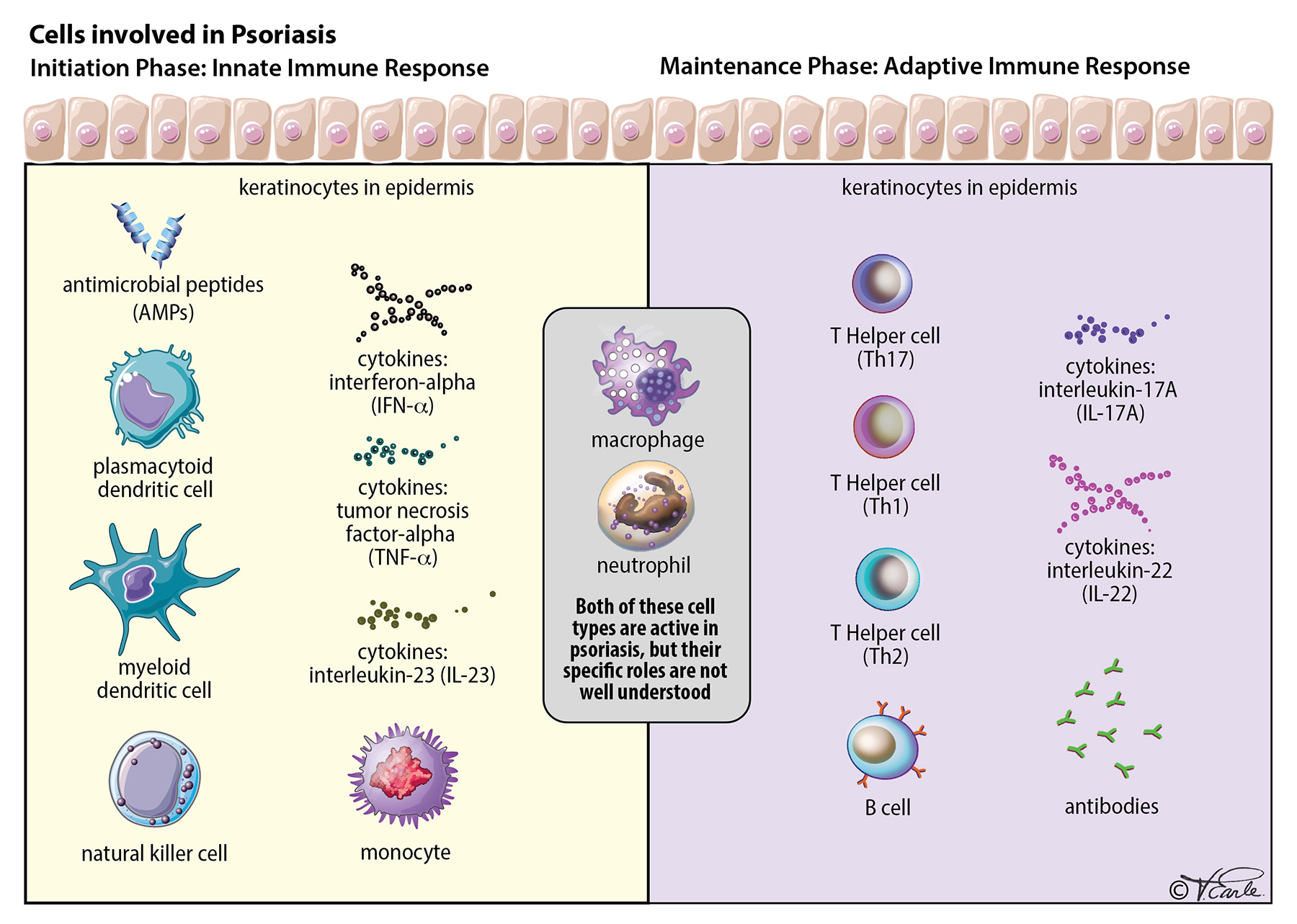 You may wonder why we are discussing different cytokines. The reason is that cytokines function as the targets of different medications, which work to reduce the number of cytokines that are activated. A lower level of cytokines results in less inflammation and ultimately the improvement of psoriasis.

By knowing the cytokines, you will be able to easily understand how the medication you are taking may work. Many medications for treating moderate-to-severe psoriasis are biologics, a group of medications given to a patient through infusion into the veins or injection under the skin. Each medication targets a specific cytokine, for example, infliximab is an anti-TNF-alpha drug which targets and lowers the level of TNF-alpha. There are many biologics available to patients in Canada.

Table 1. Biologics and Their Drug Target in the Treatment of Psoriasis

Other Body Processes Impacted By Psoriasis

Besides inflammation, there are also a few other components that may contribute to the manifestations of psoriasis. In the blood vessels of psoriatic skin, there is an elevated level of molecules that stimulate the overgrowth of cells lining the blood vessels. Therefore, the blood vessels feeding the skin become dilated, tortuous, and leaky which cause the red color and bleeding of the skin.

Besides skin trauma mentioned earlier, certain other environmental factors seem to have a role in the onset of psoriasis or potentially exacerbate psoriasis, including bacterial and viral infection, cigarette smoking, alcohol use, emotional stress, and certain medications. The most common medications are beta-blockers for improving heart function, lithium for certain mood disorders, and antimalarial drugs.

Clinicians and scientists are working hard to further understand what causes psoriasis and makes it develop. With better understanding of these underlying processes, new drugs can be developed to achieve improved health outcomes for patients and improve patients’ quality of life.

Now, you learned a lot about psoriasis. Try to answer the questions below and see how much you have learned.

Question 1. Which of the following statements about psoriasis is INCORRECT?

Question 2. If you and your dermatologist decided to treat your psoriasis with a drug called etanercept which is an anti-TNF-alpha injection medication, what will the drug do?

Question 3. Which of the following factors could potentially make your psoriasis worse?

Answers to the questions: B-C-D

We are a non-profit organization serving those impacted by psoriasis and psoriatic arthritis.

Publish the Menu module to "offcanvas" position. Here you can publish other modules as well.
Learn More.